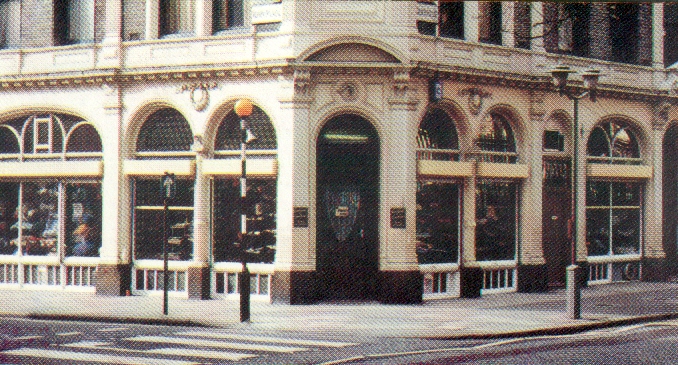 Westaway and Westaway  began trading as a men's wear wholesaler in 1937. It opened its first showroom in Bloomsbury, London  at the end of the second World War and  this became a retail shop during the mid 50's offering a large selection of high quality Scottish Knitwear and tartans  which proved to be very popular with students and tourists from overseas. Its second shop was opened  opposite the British Museum  in the swinging sixties when  tight fitting Shetland pullovers and mini kilts were the height of fashion. Westaways  cotinued to expand during the 70's and became famous the world over for having possibly the largest selection of Cashmere knitwear from the leading Scottish manufacturers  at the  most reasonable prices in London. This was confirmed in an article in the New York Times written by Elaine Goodman early in 1985.

At its peak in the early to mid 80's, Westaway & Westaway occupied three shops in the Holborn area of London, the one illustrated above at 62/65 Great Russell Street in front of the British museum, along with one the other end of the museum at 92/93 Great Russell Street, and a smaller one at 29 Bloomsbury Way.

As the market decreased and the Scottish manufacturers dwindled in numbers, Westaways started going to Spain to sell directly to their customers there, and visited the towns of Bilbao, San Sebastian, Oviedo and Madrid. The business there grew leading to the first shop in Spain, at General Pardiñas, 74,  Madrid which has been replaced by a new shop at Duque de Sesto, 13. This shop is currently closed until further notice.

Westaways have always offered a mail order service to their customers. Originally this would be by phone or letter and conventional catalogue. With the advent of the internet and secure online transactions, westaway mail order is now an internet based business, although a catalogue is still available along with the conventional forms of ordering.